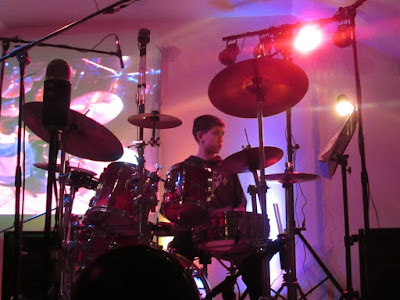 In an occupation dominated by men, 26 year old drummer Jen Clarke of Somers stands out. On more than one occasion she's been confronted with comments like, "What are you carrying those for your boyfriend," says Clarke. However, she's not worried either way because anyone who's caught her pounding away at local bars like Jackson Wheeler in Pleasantville and Pete's Saloon in Elmsford probably has found themselves banging on their steering wheels in similar fashion after last call goes out.

Clarke describes herself as a "groove drummer" or someone who's there to make the band sound good, and "not just to show off your chops," she says. Still, before actually finding her niche, a lot of random banging went on between her first drum set in the fifth grade and The River Bottom Nightmare band at 14. "I didn't really start studying the instrument until four or five years ago," says Clarke.

She recently returned from two years of studying at the prestigious University of North Texas, which boasts one of the nation's best jazz programs. While working toward her liberal studies degree at SUNY Purchase, she hooked up with an ensemble group in White Plains, and "sat back and listened," she says.

After eight months of patience, she began to play with numerous tri-state area musicians and bands such as The Wallbangers and The Geoff Hartwell Band.
In addition, Clarke has played solo gigs with Lew Soloff of Blood Sweat and Tears and Carmen Leggio of the Buddy Rich Band. She can also be heard on several CD's, including one to be released in August called, "Future Blues : A Tribute to Paramount Records.

So do big city names like these make her nervous? Working with such professionals raises the level of her game. In contrast, she says, "I'd like to think, I raise the level of theirs too."

On the other hand, as a club musician, she's seen her share of seedy environments. But she always gets a thrill from helping to pull it together with the band in hopes that the opportunity arises, she says, "to lay it out there and play your ass off.”

Clarke's not even deterred by one enthusiastic gentlemen who points this huge zoom lens at her on the occasional gigs. "You got to love him," she says about her dad.

In so much, she fondly recalls his consistent lament whenever she would descend to the basement. "Oh the banging," she recalls, and eventually both her parents came around to the life she chose. "I don't think they were thrilled that that's the career I chose but they are the type of parents that are just like whatever makes you happy makes us happy," she says.

Still, she doesn't sit down and write music, but she loves being one of the working pieces of a band that creates a sound together as a unit. Her part, Ms. Clarke says, "is to give it shape and direction and excitement.”

Clarke has never been prone to getting involved in artistic meltdowns and prides herself on being easy going and flexible on these collaborative efforts. "If I meet someone I am creatively connected to, I will open up to them," she says.

Mostly she wants to know what's expected of her so she can get it done for the band. Getting it done, while she's not performing or tutoring music lessons twice a week, also means staying current and being influenced by as wide a variety of sources as possible.

She sees herself a chameleon who hopefully can draw on all these sources and adapt to whatever the musical situation demands. Looking forward, she wants to go on "playing good music, with good musicians and making good money."
Posted by Rich Monetti at 11:30 AM